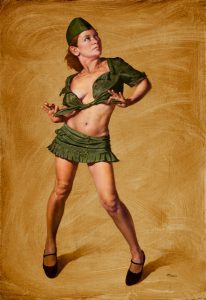 Compositionally, I see drawings and paintings as optical melodies of visual elements, such as value, line, and color, which serve as the key, notes, and chords of a visual song or dance. In my eyes, a visual composition can be as refined as a single chord (Rothko comes to mind), or possess the complexity of a symphony (consider the Sistene Chapel). Artistically, I’m deeply intrigued by the expressive potential of the myriad visual elements and find myself on a lifelong journey of exploration and realization of that potential. To me these elements are relevant whether incorporated in a purely abstract composition or into one that is more “representational.” Despite the fact that my own visual music generally falls at the representative end of the spectrum, for me, it’s not what is depicted, but how it is depicted.

These days, my work is predominantly figurative as I’m particularly inspired by the grace and beauty inherent in the human form. Through the figure I find myself striving to capture, interpret, and express the modern human experience in a way that is timeless, yet wholly relevant to our time, be it narrowly focused or grandly sweeping. Along those lines I see the role of the figure in my art much as the role a dancer plays in a ballet: profoundly moving in and of itself, yet an integral part of a larger story. Additionally, I’m become increasingly interested in representing the play of light through space and across form (notice how a little well-placed highlight or dark accent can bring a painting to life).

I paint primarily in oil, and draw using just about any useful media. As I’ve traveled an artist’s path, I’ve found profound inspiration within the galleries of the world’s art museums, and artists who have been strongly influential to me include Titian, Velazquez, Rembrandt, Vermeer, Sargent, and Sorolla. Ultimately, my hope is to incorporate the visual tools, the character of light, and the human element to create expressive compositions that are visually compelling, intellectually stimulating, and engaging to the viewer on multiple levels.